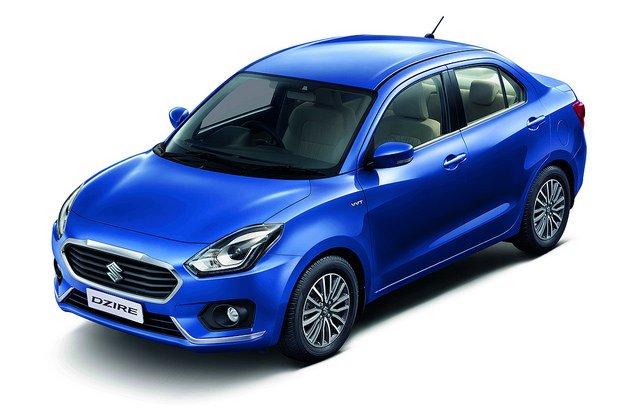 In a prolonged attempt to revive the compact sedan space Maruti Suzuki has launched its latest version of the Dzire in the Indian market. Taking the future aspects in to consideration the largest car maker has made a good changes in the features in the car. The car come with features like Dual Airbags, ABS with EBD and ISOFIX child seat mount as part of standard fitment in all models. The new Dzire brings in some of the most appropriate design, cabin space, interior features and safety features.

Dimensions- In terms of dimension the car has a length of 3995mm, height of 1,515mm and width of 1,735mm. It is also equipped with longer wheel base which is 40 wider than the previous design. The third generation Maruti Suzuki Dzire now comes with stylish hexagonal front grille, projector headlamps, LED DRLs, all-new front bumper, fog lamp which looks completely different and really stylish in its aspect. The Appealing look as it sports body coloured ORVMs with integrated side indicators, body coloured door handles, and also adds charm to the car. The rear look of the sedan gets Dzire badging at the right side with new boot design, and good looking LED tail lamps.

The car is based in the similar platform of HEARTECT where the top seller Baleno is Being built. Regarding the features the car is equipped with a new infotainment system with apple carplay and android, automatic climate control, multi-functional steering wheel, start stop button etc.

The new Dzire unit comes with a 1.2-litre K-series petrol unit while the diesel variant gets 1.3-litre DDiS unit. The petrol unit can produce 84bhp of max power and peak torque of 114 Nm while the diesel engine can develop max power of 74 BHP and 190 Nm of max torque. Both the engines with 5-speed gearbox as standard and 5-speed AMT unit as optional. The company claims of 28.4 km for petrol and 22 km for diesel respectively, which is best in class.
In terms of colour and variants the new car will 4 trims L, V, Z and Z+ with 14 variants.

The car will be the directly compete with its rivals like Hyundai Xcent, Honda Amaze, Volkswagen Ameo, Ford Aspire, Tigor etc. in the market.

As the new Dzire has emphasised on the safety features, design and styling it definitely has an better edge than current model, the sedan gets an introductory price of INR 5.45 lakh for base model to goes up to INR 9.41 lakh (ex-showroom Delhi).