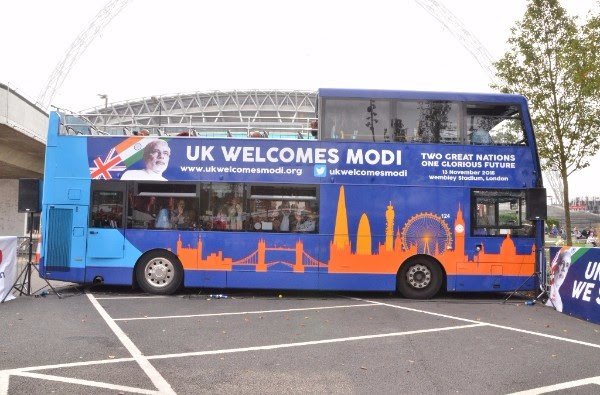 Anticipating changes for positive developments, the Indian community in UK is gearing up to give a grand welcome to Prime Minister Narendra Modi on his maiden visit to UK in November. A bus named Modi Express was launched there on 11th October, Sunday by groups of Indians for Modi’s month long tour there to visit the significant places there. The organizing committee intends to have important discussions with Modi in the bus, travelling around UK. Getting ready for giving a grand welcome, around 400 community organizations are joining together to give Modi a reception of Olympic style on November 13th at Wembley Stadium. Inaugurating the Modi Express bus by performing a coconut breaking ceremony, Lord Dolar Popat expected with pleasure, the participation of all sections of people, there, to make Modi’s vivid a great success there.

Lord Popat hoped that the people would come forward, wholeheartedly support and participate in it to pick up and follow Modi’s principles for progress. Groups of Indians have announced people to follow Modi and listen to what he says, to follow his ideas. Now, great excitement is prevailing there, among all communities of people.The ‘UK WELCOMES MODI’ Reception will be held at Wembley Stadium. Muhammed Butt who is the leader of Brent Council of the London Borough, the place where Wembley is located, is ready to welcome Modi. More than 60,000 people are likely to attend the ceremony. Applications for invitation have been received from people of more than 250 towns and cities of UK.